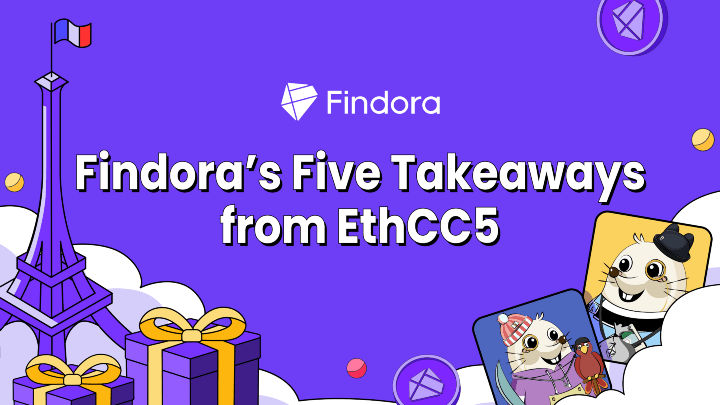 Major trends among communities and some lessons on how to build during a bear market.

If you weren’t able to make it to #EthCC5, we’ve got you covered. The following were some of Findora’s biggest takeaways: new trends, buzzwords, and lessons for how to grow during a bear market.

No one likes a downturn — but the attendees of EthCC didn’t let it get in the way of a good time. Bear markets are the best time for projects to prove themselves, and Findora isn’t letting this opportunity slip away.

Even though EthCC is a community conference, they held a hackathon and had several solid entries. The ZK-Moles Scavenger hunt was a fun idea that led to some key collaboration and insights discussed below. Findora managed to connect with several future partners, including Ledger, and FRA has enjoyed a surge in price since the convention.

This is great progress, especially during a bear market. It shows you don’t need to just button down the hatches if the market tanks, you can still grow and build, if you know how and have true value to offer. People, and investors, are taking notice of projects that are pushing through the adverse market conditions.

It’s the kind of attention any project would want when liquidity starts to evaporate. Though Findora won’t speculate on future market trends, we do think understanding the present is key to success. So, here are some big takeaways Findora community members got from EthCC5 that we think will benefit any project that is building through a bear market.

Build Communities through Fun, not Profit

There’s an inverse relationship in Web3 between how fun a project is and how much profit it makes.

It’s just a general trend: during DeFi summer, people worked hard to maximize their yields. Yes, it was a lot of stress, but it was profitable until the winter came.

In a bear market, when you can’t chase yields, the better investment comes from chasing fun instead of only-up numbers.

Take this example from Aleo. They had a great presentation at EthCC where they used Zk technology and true randomness to create a roulette game demonstrating how the technology can be applied. Online games can use ZK to keep people from feeling that the house will always win — it lets games be won by rational actors.

Will Aleo make money off of this? No, but they’ll build a community because it was a fun idea and they made the code open-source.

Similarly, Findora’s scavenger hunt during EthCC got a small but dedicated following. We had someone who lived in Paris who couldn’t believe we had hidden NFTs in a place he couldn’t find. This game attracted other communities who thought of new spin-offs.

For instance, Findora community members brainstorming with Witty Creatures holders, came up with the idea of combing social NFTs with ZK-geocaching. We could create Ethereum maps that lead to Zk-treasure that people have to hunt. Players could wear physical social NFTs so that as they gathered around the same spot, they can strike up a connection and meet new people.

There are plenty of games with great game mechanics that don’t take much in the way of developer resources to make. True GameFi is probably years away since that’s how long it takes to develop a big, billion-dollar game. But by creating simple but fun games that rely on solid game-mechanics not graphics, it’s possible to jump-start the push toward GameFi, demonstrate your project’s concept, and build community.

Since Consensus 2022, there seems to be more and more focus on zero-knowledge projects.

For instance, the Merge isn’t the only scaling solution Ethereum may have. Both Matter Labs and Polygon announced the release of ZK-Rollups. And there was a lot of excitement surrounding the Starknet hackathon from day 1 of the convention. Findora was able to meet and network with several developers as a result.

Some Yellow Submarine community members, a cross-chain ZK project built on Findora, received very positive feedback when they pitched to Ethereum developers. They understood how important it could be for EVM chains to have private crosschain transfer built into existing tokens.

The ZK niche continues to carve out a bigger space at each crypto convention.

Give More than MOUs

MOUs are out — and Web3 projects need more before they will devote resources to exploring a partnership.

The loss of liquidity is making projects more choosy about who they work with. It isn’t enough anymore to pledge you’ll work together — people want to know upfront what you can cant can’t do. Having this readily available will be important as projects search for partners and compete for what funding is left.

The Merge is coming

Being and Ethereum conference, there was a lot of talk about the Merge. Many projects and talks were about that and the effect it might have on the network.

Ethereum developers recently shipped the Merge on the Sepolia testnet, and it was recently announced that it would be deployed on the Goerli testnet next, starting between August 6th-12th. It looks like after many years and multiple rebrands, Ethereum’s move to proof of stake is finally upon us.

The Latest Buzzword is Here

The new buzzword in crypto, which was thrown around a lot at EthCC, is the “public good.”

The idea of a public good is something like a highway or trans-ocean internet fibers or other infrastructure. Everyone benefits equally from its creation, but there isn’t enough profit incentive to create it, so a group, like a government, sets it up instead.

The new idea is to sponsor public good projects through DAOs.

The idea is certainly high-minded but also feels to some like another glittery marketing mantra. The skeptics would argue that all things, in crypto or not, are done for profit. Projects like Bitcoin or Ethereum that are meant to be equally beneficial have clear winners and losers. Whether using PoW or PoS, some will have more rewards than others, centralization is always a possibility, and all endeavors must make a return to be worth it.

The “Public Good” is another high-minded principle, but how well can people really live up to it? That remains to be seen. Perhaps principles are supposed to be out of reach to keep us growing. Whatever one’s opinion of the legitimacy of such a concept, it’s clear the newest buzzword to make crypto broadly appealing is the “public good.”

Findora made many great connections and added some amazing new validators to the network.

It became clear to many that Findora is in this for the long haul and has a strong network that is getting stronger. This is partly why the price of FRA has more than tripled in the weeks following the conference and how we can attract new partners.

Maybe that’s another great takeaway from EthCC and bear markets: when the markets get tough, the tough get building. And if you can show others you have true value to offer, that you are here for the long haul, and you aren’t flummoxed by price fluctuations — they’ll be excited to build with you too.

EthCC was a great conference, and we’re looking forward to the progress everyone will make by the time we all meet again next year.