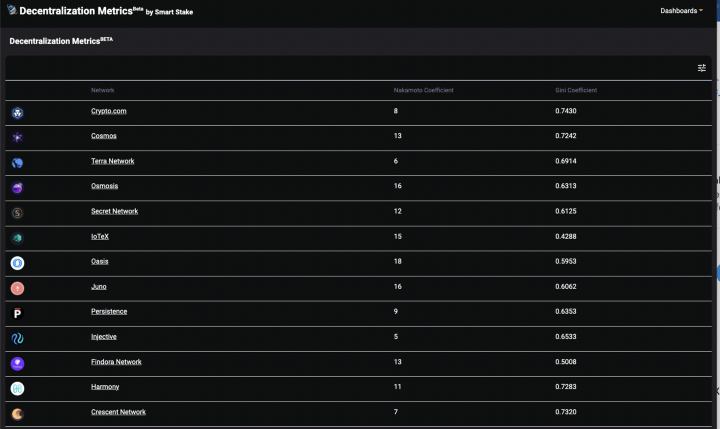 It’s called “DeFi” so isn’t everything decentralized? It turns out that many crypto projects which claim to be decentralized are actually far from it. “Decentralized” has become a marketing mantra rather than an objective metric, and maybe that’s the problem: we often talk about decentralization without pausing to define it. We’ve all heard the saying, “what gets measured, gets done,” so what’s a good way to measure decentralization?

According to SmartStake data, Findora is one of the most decentralized public blockchains, with an overall rank of #13 and a Gini Coefficient of 0.4973. Being decentralized, anyone can stake on Findora and benefit from its APY which is currently over 50%.

Staking on a PoS network is a way for the community to control the network and get rid of those middlemen. Staking on a truly decentralized network, like Findora, ensures the rewards won’t be controlled by a small group of founders and will instead be distributed equitably.

Before staking on Findora or any other network, it’s important to know a little bit about it.

Proof of Stake (PoS) is an alternative consensus mechanism to Proof of Work that requires far less energy, and that is easier to participate in. Avalanche, Polkadot, and Solana all use a PoS consensus mechanism, and Ethereum is expected to adopt it after the Merge.

In a PoS network, validators run nodes to create blocks and verify the order of transactions. Validators must stake some of their own funds as a form of collateral so the network can hold them accountable. If they are unreliable or try to attack the network with incorrect or false transactions, they are penalized by losing a portion of the funds they’ve staked. If on the other hand, they add blocks to the chain and have a high server uptime, they get rewarded.

It’s not necessary to run a validator node, which requires hardware and technical expertise, to contribute to the network and earn rewards. You can also participate as a delegator.

Delegators stake their funds with a validator to help secure the network and, in return, get to share in the rewards the validator earns. It’s essential for delegators to research which validators are reliable so they can maximize their rewards. The more FRA staked at a validator, the more rewards they earn giving them an incentive to be as efficient and dependable as possible.

Delegators play an essential role in making a network efficient by researching and rewarding the best validators.

Why participate in Findora’s Staking?

The Findora network is a PoS network. Validators and delegators secure the network by staking FRA, Findora’s native coin.

With the implosion of LUNA and uncertain macro trends, investors everywhere are looking for a safe place to keep assets. But when everything is heading down, what’s the best way to maintain the value? Staking is a great way to make your crypto work for you — and with 50%+ APY still available for now, staking FRA is a great option.

Staking FRA will let you maximize Findora ecosystem returns during bear markets like this one. By staking on Findora or providing liquidity to a Findora DEX like FairySwap, you can make the road ahead a little more straight.

Staking takes some pain out of HODLing through hard times — it helps maintain the value in your holdings and even make some passive income.

FRA, Findora’s native token, has a maximum supply of 21 billion with a current circulating supply of 4.62 billion (i.e. 22% unlocked).

In the Findora network, FRA holders can earn rewards by running validator nodes to stake FRA. The Findora network pays validators (and their delegators) two rewards — the FRA block reward and the block producer reward.

FRA tokenomics balance incentives between liquidity and locking FRA in staking. As the circulating supply decreases, the APY of the block reward decreases to ensure liquidity. When the amount of FRA unlocked from staking increases, or the percentage of staked FRA decreases, the APY of staked FRA increases, encouraging people to stake. This keeps the liquidity of the network and the security of the network in a state of equilibrium.

How to Stake FRA?

Users can stake FRA using the Findora Wallet on desktop or mobile. If you don’t hold FRA, you can purchase some from Kucoin or Gate.io, and then transfer it to your Findora Wallet. While it is staked, FRA works for you earning rewards based on the amount you have locked. The current FRA annual yield is 54%.

Users can claim rewards at any time and are always free to unstake (or unbound) their FRA using their Findora Wallet. However, as with any PoS network, note that there is a 21-day unbonding period during which you are still eligible for penalties. After the 21-day period, you can withdraw your FRA or delegate it to another validator.

The Future of Staking in PriFi

Bear markets are scary, but staking is a great way for investors to safeguard their assets and hedge their bets. Holding and staking assets with strong fundamentals that solve real-world problems is the best way through.

Businesses are not likely to use blockchains if what they pay vendors is visible to competitors. Institutions are less likely to move large amounts of capital into DeFi if their movements are signaled in the meme pool. Individuals are less likely to use dApps built on Web3 if the type of insurance they purchase, how they vote, and even their medical records are broadcast on the blockchain. Privacy is a primitive for finance and business.

Findora is already notable for its level of decentralization and scalability — but its true innovation is the privacy ecosystem it creates. As the need for privacy crystalizes and crypto ecosystems mature, PriFi will continue to grow with Findora leading the way.