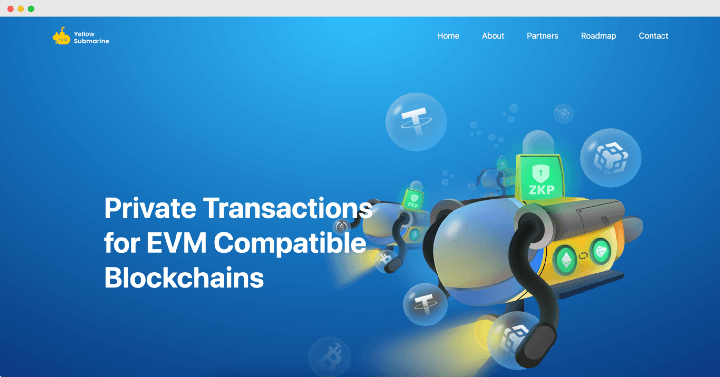 Allow Us to Introduce Ourselves…

It’s just like a submarine — after it goes underwater no one knows where it will come back up except the people onboard. The concept of Yellow Submarine can be applied to many DeFi applications, including DEXs, DAOs, and Dapps across a variety of use cases.

Currently, privacy on Ethereum and other EVM-compatible chains is very difficult. Ethereum is a public blockchain where all transactions are transparent. To date, privacy has mostly been reserved to UTXO chains, like ZCash, which was one of the first blockchains to implement zero-knowledge proofs (ZKP) for privacy. However, due to the limitations of a stateless UTXO architecture, programmability is known to be limited.

Ethereum, on the other hand, is highly programmable. However, due to the limitations of a stateful account model architecture, ZKP for privacy is much more difficult to achieve. Yellow Submarine leverages Findora’s multi-chain architecture, to parallelize ZKP for privacy and scalability on the UTXO chain, with EVM for programmability, composability and interoperability.

One of the benefits of the EVM is the composability it offers developers. So while technically interoperable, EVM chains still operate much like an archipelago of islands separated in the same sea. Yellow Submarine connects these islands in a stealthy kind of way by making private transactions across EVM blockchains as simple as a few clicks.

That’s enough about us introducing ourselves. Let’s dive under the surface and explain how Yellow Submarine works.

A simple use case demonstrating a full loop in Yellow Submarine is as follows:

We chose to demonstrate the full loop first for the following practical reasons:

Yellow Submarine adopts a customized and enhanced version of Chainbridge. It is called the Columbus Bridge. The main customization that has been done is to allow a single-relayer-to-multi-network architecture where every relayer can monitor multiple networks at the same time. This allows the ability to increase the number of relayers with lower cost and connect each relayer to diversified fullnodes. By doing so, the failure rate of relayers’ operations can be largely decreased, which boosts the success rate of the Columbus Bridge operations.

The main enhancements include the following:

3. Tools to deal with failed transfers

After a user clicks “Transfer” the frontend will invoke the deposit function of the Columbus Bridge at the source chain with the following three parameters:

resourceID is a unique ID for the asset type a user tries to transfer.

data is Web3 encoded data with: tokenContractAddress, userAddress, amount, recipientUTXOAddress. (data will be used as the input data for several functions calls before the step #12 in the flow diagram below).

After the calling of the deposit function of the Columbus Bridge, the Bridge contract will find the target handler registered for the asset with resourceID and call it through the generic handler. In this case, the target handler is just the ColumbusDeck Contract. The ColumbusDeck Contract then calls the corresponding ERC20 contract to lock the token. If the operations in this path have been all successfully executed, the original deposit call to the bridge contract will return with a status of success while an event will be emitted. Relayers will be able to monitor the event. And then, one of the relayers will be able to send a voteProposal to the other side of the Columbus Bridge (i.e. the Findora Smart Chain).

Once the asset has been transferred to the Findora Native Chain, these assets can utilize the ZKP privacy features that are powered by the Findora Zei cryptographic library. This step allows users to convert an asset to a private asset and transfer it to a brand new wallet address. In essence the asset will almost appear to be minted on the new wallet. Because of the ability of the ZKP to prove the validity of a transaction, the only thing that will be recorded will be the proof itself. No link can be established between the originating account and destination account, making it impossible to externally trace beyond this point.

The asset can now return to Findora Smart Chain via Prism++. In the step #14, the frontend will call a WASM binding provided by Findora, which then initiates a call to the WithdrawFRC20 function of the Prism++ bridge contract. Prism++ is designed in a highly extensible pattern. It allows the ability to set the processing logic and a certain type of asset based on an enum type defined in the PrismAsset. In this case, the Prism++ bridge can be set to do nothing for any asset from Yellow Submarine. This saves the steps in Findora EVM processing. The Prism++ bridge then calls the registered low level call function with data. In our case, it will call the depsitFromPrismBridge function of the ColumbusRelayer contract. The ColumbusRelayer contract will further call the Columbus Bridge Contracts.

5/ Back to the Start — Asset Transfer to Target Chain

This asset can now be used on Findora Smart Chain, or transferred to any target EVM compatible chain via the Columbus Bridge. A primary enhancement made for the Chainbridge contract is that the Columbus Bridge Contract can only be called by the ColumbusRelayer. Similar to the process of the first-time passing of Columbus Bridge, the executeProposal function of the bridge contract on destination chain will be called after the successful calling of a target contract at the Findora Smart Chain side, and similar relayers’ monitoring and voting process. After that, the bridge contract on the destination chain will execute the target contract, which is the ColumbusDeck contract. The ColumbusDeck contract will decode the data passed across the Columbus Bridge and unlock the same amount of token to the recipient address based on the information in the decoded data. Then, the recipient will receive the token. At that point, the whole process finishes. The destination EVM address is not able to be traced externally (though it may be able to be audited) to the source EVM address.