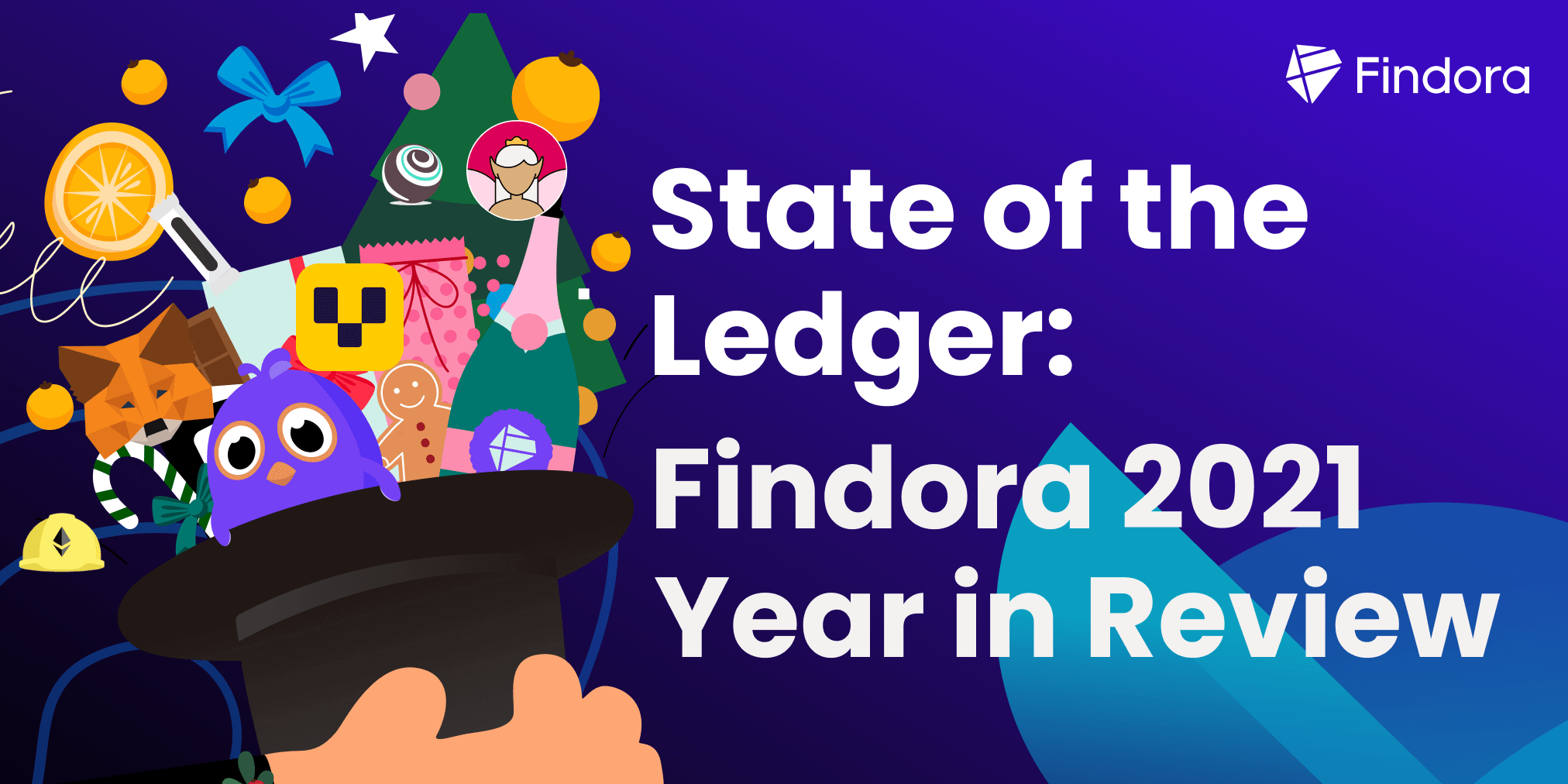 The past year was one of major growth for Findora, further establishing itself as a platform where Decentralized Finance (DeFi) can evolve with programmable privacy and on-chain confidentiality for stablecoins, wrapped tokens, NFTs, and more.

Despite massive global growth as an industry, the reality is that DeFi has barely scratched the surface. The one thing keeping institutional capital from entering the DeFi market enmasse is privacy. From masking transaction details to hiding account balances to protecting confidential business intelligence and individual user identity, these are the areas where Findora will leave its mark on the DeFi market.

The pace towards greater institutional adoption of DeFi will be accelerated by the $100M Ecosystem Fund, a new grants program announced by the Findora Foundation! The fund will seed and support a number of projects over the coming years. Some projects have already been announced – like the $10M liquidity incentive program for Venice, a community-governed AMM DEX with front-running resistance – while others are still in early stages, and many more that are yet to be conceived.

With a growing developer community, an ecosystem fund continually deploying capital towards new and exciting projects, and a perpetually improving protocol, Findora is poised to lead the charge towards institutional adoption of private DeFi, or what we call PriFi.

Let’s dive deeper into Findora’s past year of growth.

The primary factor in ecosystem growth, especially with a decentralized blockchain like Findora, is Community. This global group of individuals consists of developers, designers, evangelists, and business leaders working tirelessly together to build Findora.

Amongst them is the team at Discreet Labs, which grew from 8 people in January to over 50 people across 5 continents in less than a year! Nearly 80% of this growth is attributed to the product, engineering, and design talent side, setting up Discreet Labs – whose overriding mission is to build scalable privacy systems such as Findora – for prolonged and sustainable growth.

The first ever Findora hackathon, titled 🍂 Falling for DeFi on Findora 💟, began in late October and culminated five weeks later on December 9th. More than 300 participants competed for $50K worth of $FRA in prizes (plus a shot at $150K+ in potential grants), which resulted in 50 projects started, 39 applicants for the three bounties, and 10 distinguished judges. The hackathon produced several winners across three tracks, including:

The First DEXs on Findora

When most people think of DeFi, one of the first projects to come to mind is a Decentralized Exchange.

FairySwap and Venice are two of the first DeFi projects to build on Findora, and more are expected to launch as the ecosystem continues to grow.

When staking was first announced on Findora, along with the Frontier incentive program on Anvil Testnet, the resulting interest from prospective validators was more than anyone could have expected. Over 75 validators participated in the program, with many more opting to run Testnet validators on their own. Today, Findora Mainnet Beta features 61 top-tier organizations and individuals who have spun up validators in support of Findora. A new article series called 💡 Validator Spotlight 💡 recently showcased a few of the groups keeping Findora running: Smart Stake, Wetez, and InfStones.

Apply for the Ecosystem Fund

Do you have a project that would take advantage of Findora’s programmable privacy? Developers can apply for grants via the Findora Foundation website to help seed their ideas and accelerate their growth.

Findora graduated from testnet to mainnet beta in March of 2021 and never looked back. Since then there have been upgrades across the board from the launch of open staking, to integration of the Ethereum Virtual Machine, and more.

Premiering on Anvil Testnet shortly after the mainnet launch, open staking has expanded the community base to include more developers, platforms and tools, while increasing decentralization and strengthening network security of the protocol.

It began with the Findora Frontier incentive program, which helped to bootstrap support by incentivizing validators to run validator servers on Findora Anvil Testnet. Now, validators on Findora Mainnet Beta can earn staking rewards by contributing to consensus, participating in future governance, and acting as stewards of the organic evolution of  Findora.

The Ethereum Virtual Machine (EVM) was deployed on Findora Devnet back in September, giving developers the ability to:

… and to use tools such as:

Findora EVM quickly migrated to Forge Testnet – where it was used extensively by hackathon participants – and was most recently launched on Findora Mainnet Beta. Users can now connect their MetaMask wallets to Findora for a fully compatible Ethereum experience. Stay tuned for plenty of EVM updates in 2022!

In 2021, one of the top enhancements to Findora was the addition of a trustless cross-chain bridge dubbed “Rialto.” The Rialto cross-chain bridge is a two-way token bridge that enables seamless ERC-20 and BEP-20 transfers between Findora (via the Findora EVM layer), Ethereum and Binance Smart Chain.

The initial launch of Rialto on Findora Mainnet Beta will support popular tokens such as ETH, BNB, BUSD, USDT, USDC and Bitcoin to cross over to Findora as FRC-20 tokens — Findora’s version of the Ethereum ERC-20 standard. To incentivize users to bring assets over to the Findora ecosystem, Rialto will reimburse users’ ETH gas fees via FRA tokens.

Third party developers looking to build on Findora’s UTXO blockchain and utilize its privacy preserving features, can use the Findora SDK, an open-source JavaScript SDK with Web Assembly (WASM) bindings.

Developers can find answers to integration questions, and follow along in the how-to guide. From installing the Findora SDK, setting it up, and finally, using the most commonly called features.

Best of all, the Findora SDK can be installed by running one single command.

Findora began as a university research project and will always maintain a certain level of academic rigor when it comes to research and design. In the world of programmable privacy, zero-knowledge proofs (ZKP) and other cryptographic methodologies are incredibly important to Findora’s success. But scaling limitations have prevented further industry-wide adoption and growth of ZKP to support more mainstream use cases. The Findora research team is approaching these bottlenecks in several different ways.

A strong team of highly skilled hardware engineers and researchers have been working on hardware-acceleration of ZKP and privacy-preserving algorithms for Findora. The architecture and implementation of the verifier and 80% of the prover for PLONK has been completed. Preliminary results have demonstrated up to 10x acceleration! The prover is projected to be completed in Q1 2022. The team is also expected to expand in 2022 to support more research and development into hardware acceleration efforts.

On the cryptography side, there has been a lot of progress in the research and development of triple masking (aka, anonymous payments). An initial implementation should be available beginning early 2022. The next steps for adding more privacy onto Findora would include supporting some privacy-related operations in Findora’s EVM and developing asset tracing. The cryptography research team working on Findora has also expanded with new team members joining, and more to come in 2022.

Press mentions are too many to list, not to mention the podcast appearances and interviews. Findora was even found at a handful of in-person conferences this past year!

Our favorite articles, interviews, events, videos, and podcast appearances from the past year include:

What will 2022 bring? We’re going to take a long hard look into the crystal ball 🔮 over the next few weeks and come back to this question in January.

Findora is a public blockchain with programmable privacy and full EVM compatibility. Originally conceptualized as a university cryptography research project in 2017, and finally launched to the public in 2021, Findora utilizes the latest breakthroughs in zero-knowledge proofs and multi-party computation, to allow users transactional privacy with selective auditability. For more information, please visit findora.org.

How to protect crypto privacy in the age of regulation