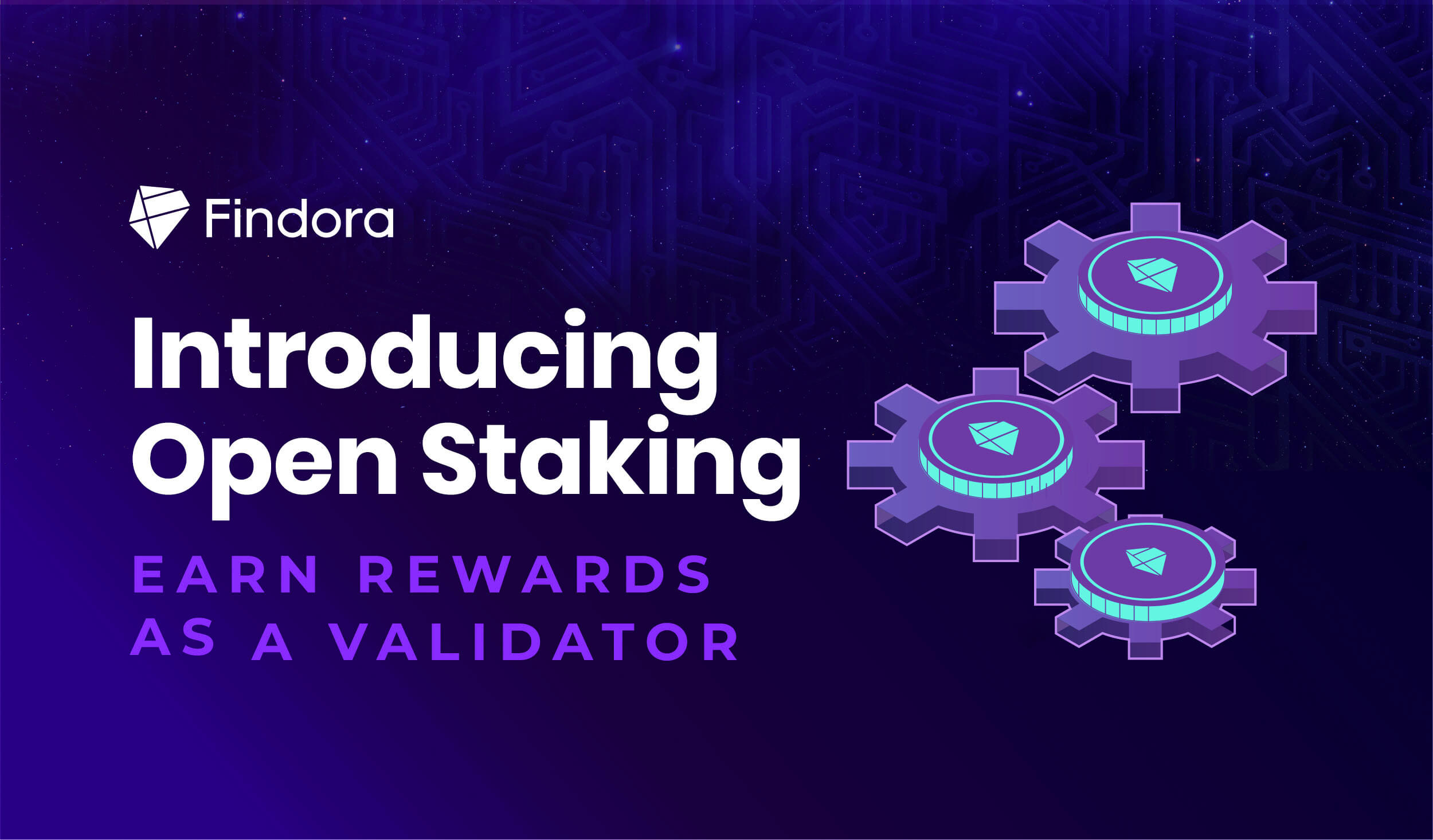 July 1, 2021 – After the successful launch of Findora Mainnet Beta 0.1.0 in March 2021, today, Discreet Labs, one of the developers behind Findora, a public blockchain with programmable privacy, has announced the release of Findora Testnet (Anvil) Beta v0.2.0 with proof-of-stake (PoS) consensus, rewards and penalties.

The v0.2.0 release on Anvil is an upgrade from the previously released Forge Testnet to include Proof-of-Stake (PoS) via Tendermint Core implemented in the Rust programming language.

The Findora v0.2.0 release on Anvil includes support for staking, delegation, and a major refactoring of existing code.

Validators on Findora contribute to consensus, participate in future governance, and are stewards of the organic evolution of the Findora network. Validators will algorithmically earn block rewards for proposing and signing blocks on Findora as part of the consensus process. Validator operators can set up, operate and manage their server via a command line interface (CLI) tool.

The Findora network is completely permissionless, meaning anyone can operate a validator and contribute to consensus. No special permission or authorization from anyone is needed to operate a Findora validator. 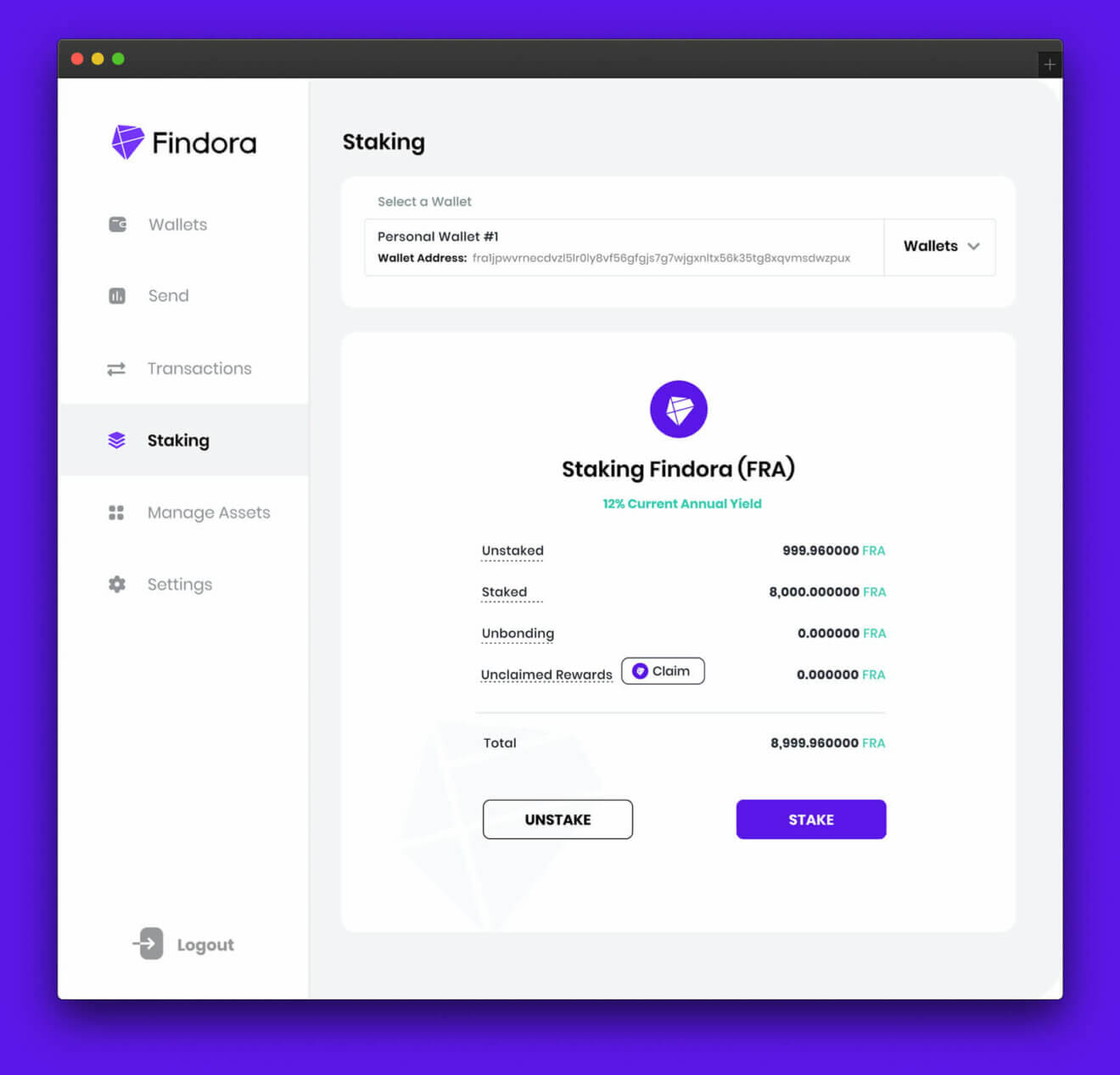 Further, FRA token holders can elect to delegate their stake directly to other validators to support the network without technically running a validator. Delegators can share rewards with validators based on fee splits determined by each validator in their discretion. Delegators can set up, and manage their delegation via the Findora reference wallet, or any other platform that supports delegation for Findora.

Validators (and their delegators) earn FRA rewards for every block successfully created. Below is an example curve that illustrates potential annualized FRA block rewards that a validator can earn based on the % of circulating supply staked. For example, if the Circulating Supply Staked percentage is 10%, then the Findora network will provide an annualized 53.6% rewards rate to incentivize more FRA holders to stake. Once the Circulating Supply Staked percentage rises to 67%, then the Findora network rewards will automatically reduce down to an 8% annualized reward rate. 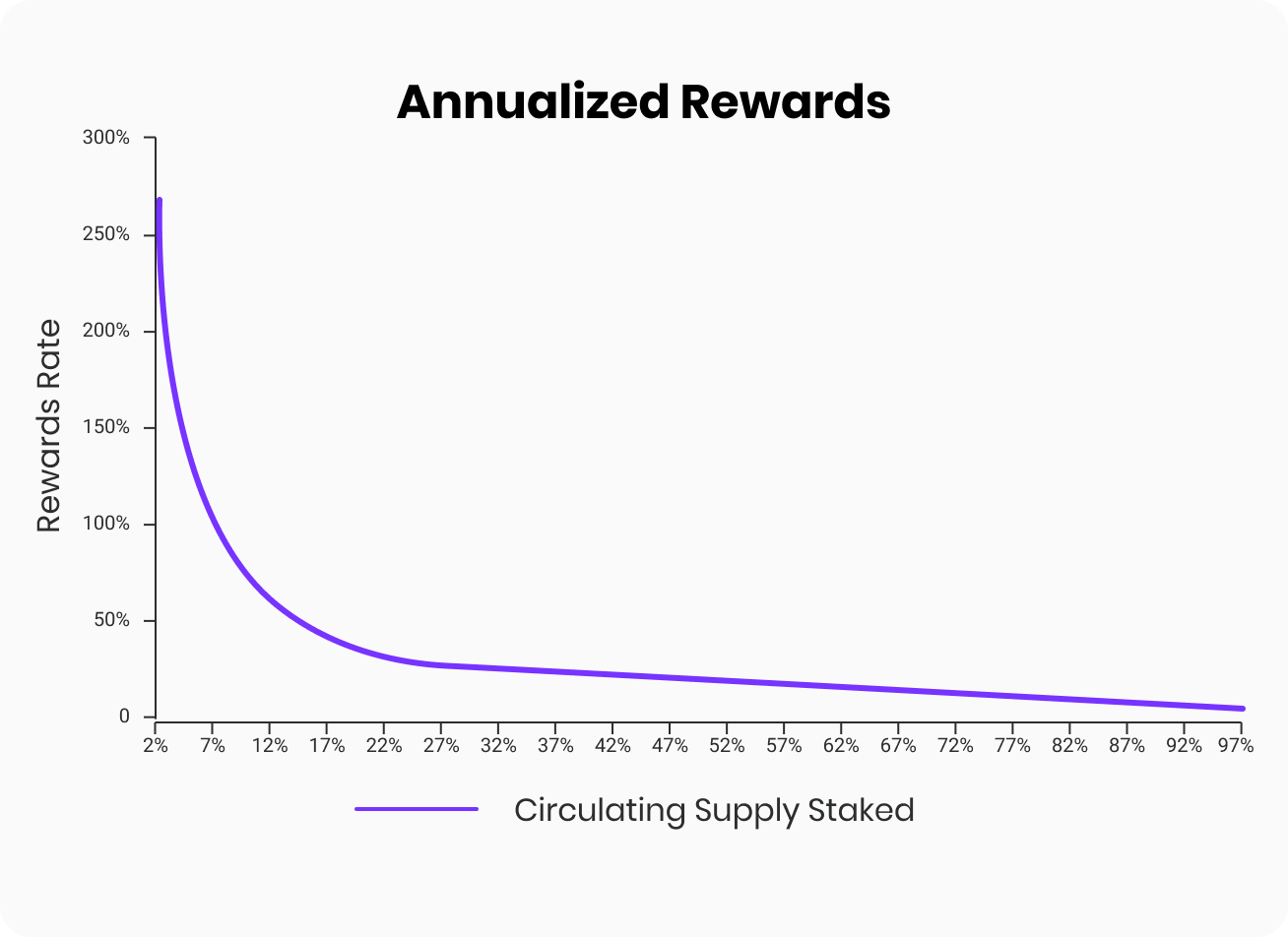 As part of the Findora tokenomic design in addition to validators being rewarded for good behavior by participating in consensus, the Findora PoS implementation also punishes validators for bad behavior such as double signing, and validator downtime. The “slashing” penalty protects the Findora network from adversarial attacks.

With this update, the Findora Foundation has also announced the Findora Frontier staking incentive program, paid in Findora’s native FRA token, to help defray some of the costs of operating staked validators.

The initial phase of the Findora Frontier program will take place on Anvil, and will award $500 to validators for completing stages 1 and 2.

The first stage on Anvil will be adversarial, lasting 3-4 weeks, with bounties awarded to developers who can uncover issues related to the Tendermint PoS consensus implementation. We fully expect some organized chaos during this stage.

The second stage on Anvil will focus on network stability, lasting 3-4 weeks, with bounties awarded to the validators that achieve the top 10 highest participation rate as measured by server uptime, percentage of blocks signed, and proposed blocks. We expect the storm to calm down a bit during this stage.

The third stage on Anvil will focus on network reliability, and performance, over an unbounded term (likely 1 year or more), with bounties awarded to developers that discover significant network optimizations.

THE FINDORA FRONTIER PROGRAM IS NOT BEING OFFERED TO ANYONE IN THE UNITED STATES, THE BALKANS, BELARUS, BURMA, COTE D’IVOIRE, CUBA, DEMOCRATIC REPUBLIC OF CONGO, IRAN, IRAQ, LIBERIA, NORTH KOREA, SUDAN, SYRIA, ZIMBABWE AND OTHER PROHIBITED JURISDICTIONS. ADDITIONAL REQUIREMENTS DESCRIBED HEREIN WILL ALSO APPLY. ALL PARTICIPANTS WILL BE REQUIRED TO PROVE THEIR ELIGIBILITY IN ORDER TO PARTICIPATE AND RECEIVE REWARDS UNDER THE PROGRAM.

Once Anvil is running smoothly on Findora Testnet Beta v0.2.0 with a sufficient number of well staked validators, for a period of 6-8 weeks, it is expected that validators will upgrade Findora Mainnet Beta to v0.2.0 with staking and delegation as well.

If you are a validator operator that is interested in staking on Findora, then read the documentation for setting up a validator, and join the Discord channel for more information.