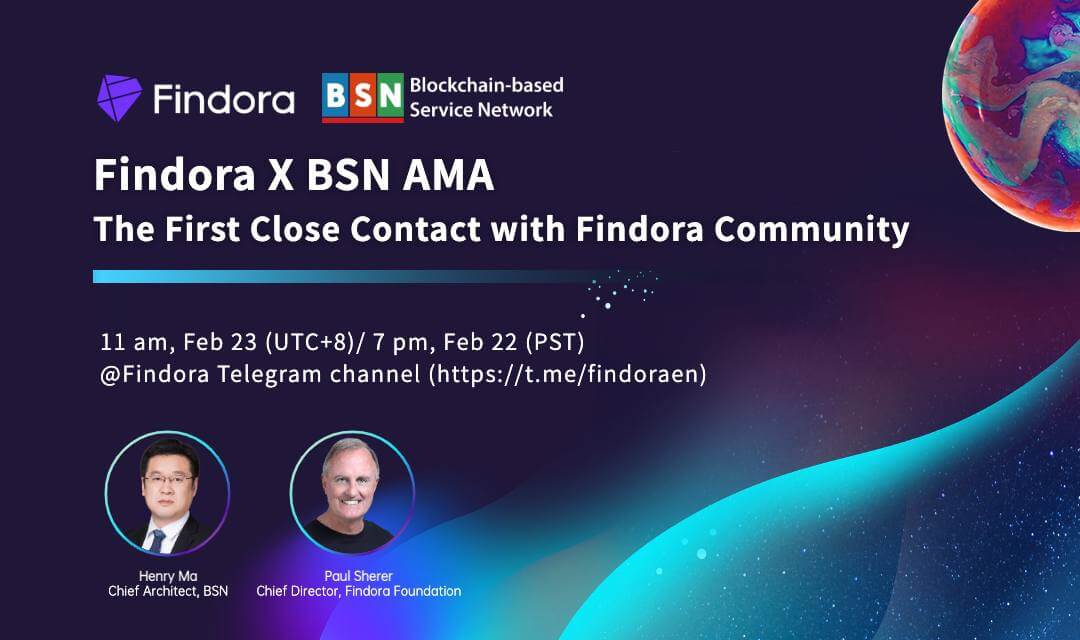 This transcript is taken from a live AMA with Findora’s Chief Director Paul Sherer and Henry Ma, Chief Architect of BSN. The AMA took place on our official Telegram channel on February 22, 2021 and was hosted by Matt Arney, Head of Growth at Findora.

Matt Arney: Good morning and good evening to you all from Palo Alto! I’m Matt Arney, Head of Growth at Findora and I’ll be your moderator today. We’re pleased to have an exciting program for you – so glad you all could make it. Today, we have two very special guests from BSN and Findora.

From BSN we have Mr. Henry Ma – Chief Architect of BSN. And we have Mr. Paul Sherer, Chief Director of Findora

Mr. Ma – can you please provide us with a quick intro?

Henry Ma: I am Henry, I have 10+ years of experience in software development and product design. and currently working as the chief architect of BSN and a hands-on engineer in delivering all BSN products, including public BSN, private BSN and BSN empowerment platforms. I am also in charge of all technical work related to integration of permissionless/permissioned chains, open permissioned blockchain initiative and interchain services in BSN.

Matt Arney: Awesome – thanks for the great intro!

Hi Paul – can you give us a quick intro as well?

Paul Sherer: Hi everyone, I am Paul. I am a tech entrepreneur and financier based in Silicon Valley. I have received an MBA from Stanford Business School and have previously cooperated with John Powers, the co-founder of Findora Foundation for decades. More recently, I have served as a managing partner at VantagePoint Venture Partners and managed $5 billion PE assets there. As one of the original founding team members of Findora, I have worked closely with John Powers and Lily Chao and have witnessed our development from Silicon Valley to Shanghai, and even the world, which is really exciting.

Matt Arney: Thanks to both for your great intros. Let’s get started on some Q/A now. Our first question is for Mr. Ma.

Can you tell us more about BSN, how it got started, and what its mission is?

Henry Ma: The Blockchain-based Service Network (BSN) is part of China’s national strategy to lead the digital transformation of the economy, announced by President Xi in October 2019. The BSN is a cross-cloud, cross-portal, cross-framework global infrastructure network used to deploy and operate all types of blockchain applications. It is a one-stop-shop for DApp developers.

We have built entire operating environments and shared nodes on BSN’s public city nodes (PCN) around the world. Developers only need to choose which PCN to connect and upload smart contracts.

Currently, there are three types of services available in the BSN ecosystem.

With the recent launch of BSN’s open permissioned blockchains, the permissioned version tailored for the public chains are now also available in the developers’ toolkit.

In the beginning, we realized blockchain and DLTs are essentially regional networks where they build applications in their own environment and are separate from each other. There could be an internet environment where there are tens of thousands of interconnected DLT networks. One of our primary goals is to include as many blockchain frameworks as possible and make them accessible under one uniform standard on the BSN platform. In that way, we can save users overhead costs to build a blockchain while being able to offer more custom services. Our mission: To reduce the cost of blockchain application design and deployment while powering communication between chains. It will be made available around the world through local cloud providers, ultimately creating a global internet of blockchains.

Matt Arney: Thank you for that explanation – it’s amazing work you are all doing at BSN.

Matt Arney: How about you Paul.

Why does Findora want to join forces with BSN?

Founded in 2017, Findora is an open, private financial network that is owned and democratically secured by a decentralized network of worldwide organizations and economically incentivized parties. Using Findora, developers can create digital assets, applications and smart contracts which can transparently preserve confidential information using advanced cryptography.

Findora is a market leader in zero-knowledge proof and multi-party computation technologies with strong distributed system engineering capability. Findora is committed to the mass adoption of blockchain technology at enterprise scale. We are targeting sectors seeking significant investments to achieve rapid fundamental innovations including — e-commerce, energy, finance, healthcare, technology. Our approach is to offer advanced blockchain infrastructure that operates at scale across any public blockchain. We will support the full investment lifecycle including currency, credit, contract and custodial functions.

Matt Arney: Great thanks for that background lets move on to the next question.

How did BSN first discover the Findora Foundation and why was BSN interested in working with Findora?

Henry Ma: BSN is striving to accelerate the mass adoption of blockchain technologies by providing high-quality blockchain services. We are dedicated to offer different choices as much as we can to developers. We are always actively looking for good public chains to integrate into our system. Now we have integrated 15 public chains into our ecosystem including Findora. Beyond that, BSN and Findora also have some ideas to agree that we all want to build infrastructures to facilitate global developers. Findora platform is designed to create a global financial network where anyone can build and make use of financial services. We found that Findora, acting as an infrastructure for a global decentralized financial network, perseveres data privacy and offers convenient financial choices for all kinds of users. Now Findora will be integrated into BSN International (bsnbase.io) soon, developers around the world will be able to develop DApps on Findora and it costs them as low as $20 monthly.

Matt Arney: Impressive – 15 chains in less than a year you’ve been very busy!!

Paul – a similar question for you.

How did Findora learn about the opportunity and what outcome do you expect from the project? How much effort and resources will Findora divert into this project?

Paul Sherer: We learned about the opportunity through our existing relationships in China including The Bank of China. We would expect to be among the most active contributors to the BSN. Findora has fundamental alignment with BSN as a public blockchain supporting multiple services.  Over time, Findora should become a fundamental bridge across many geographies and across multiple applications in China.

Findora is both a decentralized and internationally-focused project and our team reaches almost every corner of the globe, including throughout Asia. Through mutual connections, we at Findora have had the pleasure of sitting down with BSN stakeholders and visualizing what our successful partnership will look like. These initial discussions have quickly materialized into a strategic partnership in which we will integrate BSN’s technology into Findora’s protocol, and our main-net will be launching to the public in Q1. We’re excited for this integration to go live, and our team of world-class engineers and blockchain experts is committed to delivering an end-user product that both BSN and Findora will be proud of.

Matt Arney: That’s great and I’m sure many here today are interested in when mainnet is coming – it’s soon right? 🙂

As for BSN’s roadmap what does it look like for 2021 and how do you plan to continue to support such fast, easy development?

This will include two projects basically 1) a payment network and 2) public chain in which “gas fees” can be paid without buying cryptocurrency. Both projects will make it easier to use blockchain without buying cryptocurrencies. It will make the technology appear less risky to large businesses. Separating blockchain from these state-free currencies will likely reassure accountants and annoy purists.

Red Date Tech expects to launch a CBDC and stablecoin payment layer on the BSN in H1 2021, and is in talks to develop a public chain for such currencies. More details can be found here:

Matt Arney: I just went to the article and bookmarked it so I can read later – sounds exciting! Just two more questions to go until our next segment.

Paul – can you tell us more about Findora and how does it stand out among other protocols?

Paul Sherer: Findora has focused its deep research expertise into resolving three core issues: Scalability, Privacy, Interoperability to enable enterprise services supporting millions of users. Our SuperSonics perform ZKProofs at 1,000 times greater efficiency to preserve privacy and process audit functions at a very large scale. Our Financial Services support numerous overlapping financial applications including payments, credit, investment, tax and procurements. In practice, Findora is able to create a protected passport with user credentials and attributes for use across applications. Importantly, user data is never exposed on blockchain with authorization achieved through mathematical verification. This privacy protection is fundamental to mass adoption.  Moreover, transaction transparency is embedded to support complete regulatory audit compliance. Finally, smart contracts are utilized to enable intelligent assessment, analysis, automation and accelerated adoption. Some existing projects are capable of addressing just one or two of these issues, however Findora is the first DeFi project that has developed a comprehensive protocol to address all four. 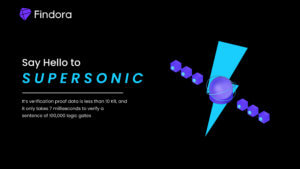 An investment fund, lending platform, or other capital management service that operates via confidential accounts on a deployed instance of the Findora system would be able to demonstrate compliance with regulations, verifiable claims about performance, and show that it is not embezzling funds. The support of Stablecoins should attract large enterprise users to adopt blockchain and benefit from Findora services.  Very exciting to see BSN leading in this area.

Matt Arney: That’s great – thanks for that Paul. Henry,

What impact will the cooperation between BSN and Findora have on China’s Blockchain market?

Henry Ma: So far, the cooperation is just starting. As a blockchain infrastructure, BSN will provide Findora’ developers with exceptional low-cost resources and tools to deploy and run DApps. In addition, there are new opportunities for Findora to join the open permissioned blockchain — which allows public chains to enter China’s market legally and creates new use cases worldwide. Findora protocol lays very heavy emphasis on user data privacy as well as suiting business needs, and Findora also have an active community. I hold a very optimistic view for our later collaboration that more innovations will be provoked to offer developers more convenience.

Matt Arney: Thanks Paul and thank you very much to Mr. Ma for being here – be sure and check out BSN at bsnbase.io. A cross-cloud, cross-portal, and cross-framework global public infrastructure network used to deploy and operate all types of blockchain distributed applications (DApps).

Paul Sherer: Let’s thank Mr. Ma for his contributions to blockchain and sharing his efforts with us today !!!

Henry Ma: Thanks, have a nice day!